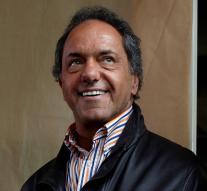 - The Argentine governor Daniel Scioli on Sunday won the first round of the Argentine presidential election. However, it seems that there will be a second round of voting because Scioli would not have achieved the necessary majority.

For the first time the Argentine people could not vote in twelve years a member of the Kirchner family. Cristina Fernández de Kirchner has been president since 2007, but she was constitutionally barred from a third term. The Kirchner spoke earlier its support for Governor Scioli.

The approximately twenty million voting Argentines have not only voted for a presidential candidate, also voted for governors, mayors, senators and numerous other officials.