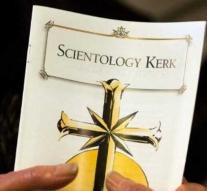 los angeles - With increasing criticism, the Scientology organization started its own television channel on platforms such as Apple TV and Google Play.

The announcement of the association suggests that Scientology wants to respond to repeated allegations of abuse and wants to show its own version. Scientology describes itself as a church, but according to critics it is a dangerous sect.

Recently, actress and ex-Scientology supporter Leah Remini ('King of Queens') accused the organization of an eight-part documentary of sexual and psychological abuse. Scientology has prominent members such as the film stars Tom Cruise and Elisabeth Moss ('The Handmaid's Tale').

The Church of Scientology claims to have millions of members worldwide, but according to independent sources there would be no more 30,000 to 50,000 members, especially in the United States.

In Belgium, the movement is officially labeled as a sect. Scientology has also been classified as a sect in Germany and there are politicians calling for the organization to be banned. According to former supporters in the Netherlands, Scientology has between one hundred and two hundred members in our country.