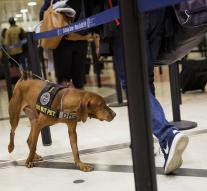 - The refined sense of smell of the dog among others used in the detection of explosives. Its success has prompted US scientists to develop an artificial sleuth. Which even appears to sixteen times to work better than the four-legged friend.

Experts estimate that the sense of smell of the dog is a million times stronger than humans. The plastic nose which is now manufactured by the National Institute of Standards and Technology in the United States, that capability exceeds again many times, stands in the magazine Scientific Reports.

Not only explosives could soon be detected artificially according to scientists. Also, drugs and possibly cancer can be smelled as long as the device is maintained at about 4 centimeters. The artificial nose 'breathes' five times per second in and out to pick up scents. That are immediately analyzed by cells.

It is not yet known when the sleuth in the market and what it will cost. Until then, the dog remains number one.