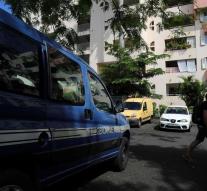 paris - In the apartment of a man who fired on agents on the island of La Réunion on agents and injured them, police and police found more weapons and raw materials to make molotov cocktails.

The man was overtaken and arrested shortly after the shooting. He is suspected of committing a terrorist attack. His mother was also arrested.

La Réunion is a French sea department in the Indian Ocean, which lies east of Madagascar.