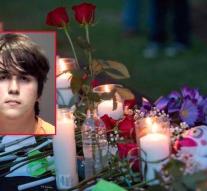 santa fe - The 17-year-old Dimitrios Pagourtzis, who shot ten people at a Texan school on Friday, gave away a show in a church that same week. Images of the Greek dance act have surfaced.

The dance in a Greek Orthodox church was part of a larger Greek festival in a place about thirty minutes from Santa Fe, where the boy went to school.

Entertainment site TMZ, which managed to get hold of the images, writes that the people who knew Dimitrios could never have suspected that one day he would kill people. Eight students and two teachers were killed.