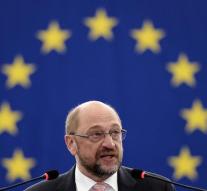 - "The European Union should take the ethical rules it adopts former members of the European Commission against the light, after all the fuss over the appointment of former Commission president José Manuel Barroso at Goldman Sachs. This is suggested by President of the European Parliament Martin Schulz Wednesday in an interview with the German newspaper Die Welt."

"Juncker made this week that the Ethics Committee inquiry into Barroso's new job and Schulz would even go one step further.,, We have to adapt the code to better define what a former committee chairman or commissioner can and can not do. ''"

"The move to the US investment bank Barroso has come to be strongly criticized, including his successor Jean-Claude Juncker and EU Ombudsman Emily O'Reilly.,, Commission President Juncker to treat the right decision by Barroso henceforth as an ordinary lobbyist, '' says Schulz."

"Barroso reacted as if stung by a wasp on the criticism. In a letter to Juncker, he writes that he has not been adopted as a lobbyist or Goldman Sachs to advise on the brexit. The fact that he is 'normal' lobbyist will be treated Barroso also shot down the wrong way.,, This is not only discriminatory, but also seems to deviate from the other former members of the committee have been treated. ''"