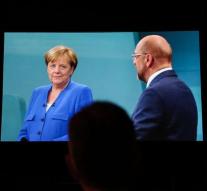 berlin - Martin Schulz, the candidate of the Chancellor's Chancellor's SPD, challenged Angela Merkel to cross the judges again on television before the Germans go to the polls on September 24. In the TV debate on September 3, according to him, many topics that touch the citizens were not raised.

'Therefore, I sent a letter to Mrs Merkel on Tuesday and invited her to discuss again with me,' said Schulz in the ZDF program Klartext. The audience greeted the proposal with applause. According to Bild, which quotes from the Schulz letter in the Wednesday newspaper, it should include digitization and retirement. 'The bourgeoisie deserves a detailed debate on the key issues for the future of our country. '

Also the TV channels ARD, ZDF, RTL and SAT. 1 wanted more than one duel between Merkel and Schulz, but the chancellor would finish it.