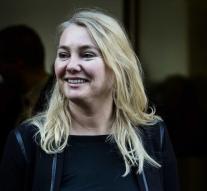 - The majority of Dutch voters finds that not only Labour Secretary of State Wilma Mansveld (Track), as well VVD minister Melanie Schutz (Infrastructure) should have resigned after a damning report by the parliamentary commission of inquiry on the Fyra. This is evident Sunday in the weekly poll by Maurice de Hond.

Mansveld got last Wednesday rough time when the report was published. The Secretary of State then resigned immediately, without waiting for the parliamentary debate. 57 percent of voters believe that right. A quarter of the PvdA voters feel that they never should have resigned, more than two-thirds thinks so. 54 percent say it is right that she immediately, even before the debate has resigned, 14 percent of the PvdA would have preferred that they had waited until after the debate.

Of those surveyed 66 percent said Schultz also should resign. Especially SP and PVV voters pass a harsh judgment. More than 80 percent of them agree with the proposition. A small majority of the own supporters (53 percent) of the VVD minister thinks that she should step down.

The letter from the leaders of the parties in the House calling for the tone of the asylum debate unnecessarily to let harden, is seen as a good initiative. Only a minority among PVV MPs is fond of writing, 60 per cent rejects it.

In the distribution of seats in the poll Dog this week few shifts. The Christian Democrats lost one from last week and comes out at eighteen. GroenLinks is one marked and has fourteen virtual seats. The PVV remains the largest with 37, followed at a distance by the VVD and the CDA 19. SP and D66 both get seventeen seats in the poll.