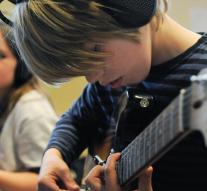 amsterdam - The Amsterdam school the Triangle had Thursday the first: the first digital music lessons using the new method Kazoo. The lesson was given by opera singer Tania Kross.

Kazoo is a method that uses the digital whiteboard. There are lessons from artists such as Martin Garrix, Marco Borsato, Tania Kross and Fay Lovsky which children become acquainted with different types of music and they also carry out assignments. Teachers do have to have any special musical skills and tools are not necessarily required.

Kazoo is an initiative of the Concertgebouw. That gave orders to develop the method because music lessons is important for children's development, but in many primary schools is under pressure. Teachers say there do not have time or do not know how to give that lesson.


The music lessons are for groups 1 through 8 and go to the schools 2.50 euros per student per year, according to the Concert Hall.