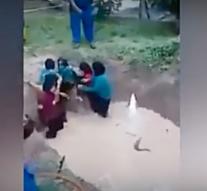 perak - A video of terrified schoolgirls is the talk of the day in Malaysia. During a training camp the group of children was forced to swim in a quagmire where snakes were then thrown in. Purpose: The girls, between 10 and 12 years old, making resilient for the rest of their lives.

Social media is shameful speaking of bizarre training methods in the western province of Perak. The images can be seen that the girls panicked out of the slimy pit trying to climb. Meanwhile, onlookers throw some snakes in the lake. If the men also declared that it is poisonous pythons, panic strikes all yours.

According to the authorities, the training of the mire is not unusual, but the use of snakes goes too far. Four coaches and six assistants to the training camp have been inactive.