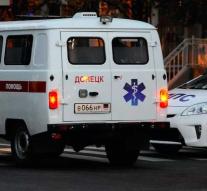 horlivka - Three schoolboys were killed in the east of Ukraine by an explosion of a landmine. It happened in an area where regular battles took place between separatists and Ukrainian troops. The separatist authorities that make up the service reported the deaths on Sunday.

The boys between thirteen and fifteen years of age were all at the same school in Horlivka, a city controlled by the separatists. A fourth ten-year-old boy was wounded by the explosion. He is being treated in hospital, reported Mayor Ivan Prikhodko of Horlivka.

In 2014, fighting broke out between Moscow-backed separatists in eastern Ukraine and troops loyal to the pro-Western Ukrainian government in Kiev. Despite an international brokered ceasefire, there are often revivals of battles.

According to the UN, the conflict has claimed a total of more than ten thousand lives. Regularly, victims fall through landmines.