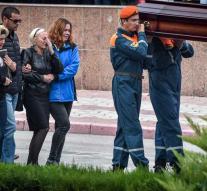 moscow - The school in Crimea where twenty people were killed last week, has opened the doors again. The students have received psychological help, reports the Russian news agency TASS. The lessons are being resumed in another school building, say the regional authorities.

A student detonated a bomb last week in the technical college at the city of Kertsj. He also shot around him. The 18-year-old man then committed suicide. The first research results showed that he possibly had psychological problems, but could still get a gun permit.