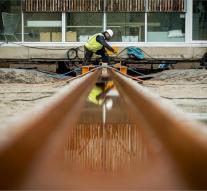 amsterdam - An Amsterdam school of nearly one million kilos in recent days shifted 30 meters. The last 5 meters are Monday bridged successfully, the municipality has announced. The school on the South Axis had to move a lot, so he at a newly constructed second part came to be.


The operation was the last few days some delay on including by strong winds last week and a small deviation in the track on which the building had to be pushed. But Monday was finalized everything. The next few days, the last things to be completed, such as the linking of the pipes. January 4, the school should reopen.
During the move, the entire contents of the school and the child simply remain in the building. Even the cups were still in the closet. The school building with one floor during the mega job is only slightly lifted using jacks 42 and then placed on steel rollers.
NEW