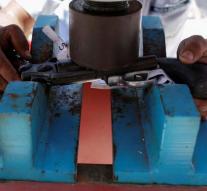 caracas - Venezuelan police have demonstratively destroyed nearly two thousand firearms in a square in Caracas. Agents used include drilling and sawing to defuse the rifles and pistols.

The action is according to Minister Nestor Reverol (Interior) kicked off a new effort to disarm his countrymen. Venezuelans can exchange their weapons voluntarily for electronics.,, We are going to disarmament and peace, 'the minister promised.

Reverol also announced that his country laser technology has tapped on the head with which ammunition can be marked. Experts say criminals often buy their weapons from corrupt police officers. In other cases, the weapons stolen from the authorities.

The South American country is plagued by violence. Gangs that infest poor neighborhoods, know more and to get heavier weapons. Due to the severe economic crisis in the country the police have fewer resources available to intervene.