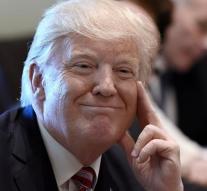 washington - The US president Donald Trump's tweets should be saved as official presidential reports. For this, Mike Quigley, Democratic member of the House for Deputies, pleads. He presented the 'Communications Over Various Feeds Electronically For Engagement Act' on Monday.

Quigley wants to prevent the president from simply removing the tweets, as he did more often. Through social media, Trump sometimes announces policies, or from his opinion on various issues. 'Tweets are powerful, the president must be addressed on every message,' said the Democrat. Earlier, Trumps spokesman Sean Spicer said that the tweets should be seen as official statements by the White House.

The first letters of the words of the law that Quigley advocates form the word COVFEFE, a word that Donald Trump twittered at the end of May. Probably a spelling mistake, but on social media there were massive jokes about the meaning of the word. The president later did not want to acknowledge that it was a mistake and said he and the people around him knew what Covfefe meant. Well he removed the tweet.