Home / World / Save the Children cease work in Afghanistan 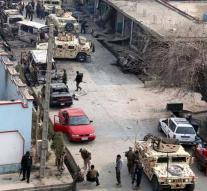 kabul - Aid organization Save the Children temporarily halts the work in Afghanistan. The organization decided to do so because of an attack on an office in Jalalabad. There were four deaths and about fifteen wounded.

The aid organization emphasizes in a statement that the highest priority is given to the safety of employees. That is why 'all programs in Afghanistan have been temporarily suspended and our offices closed. '

The attack would certainly have killed two people. At least twenty people were injured. The attack has been claimed by IS.