Home / World / Saudis get drone down in the neighborhood palace 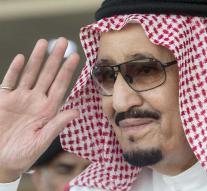 riyad - Security workers in Saudi Arabia have knocked down a toy drone on Saturday that flew near the royal palace in the capital Riyadh.

A spokesman for the police said that after signaling the drone 'acted according to the service regulations. '

King Salman was not present in his palace, an employee tells Reuters. 'The king was on his farm in Diriya. '

It is unknown whether the incident caused casualties or caused damage.