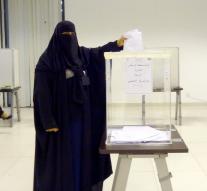 - A woman for the first time in history, won a seat in the municipal council of the city of Mecca in Saudi Arabia. That is what the electoral commission announced Sunday after the preliminary results were in, write foreign media. She took on seven men and two women.

In the conservative Islamic country were Saturday special election because women were first allowed to vote and stand for election. 978 women stood for election, compared to 5938 men. Of the 1.6 million eligible voters left 136 000 women to register to vote. The total attendance was, according to Al Jazeera about 25 percent. The official results are expected Monday.

It was only the third time that elections were held in Saudi Arabia, which is an arch- conservative kingdom. It was the last country where only men had the right to vote. In January deceased King Abdullah ensured that now women could participate in the elections.

Women are strongly disadvantaged in Saudi Arabia. They should not drive and do not travel without the permission of father, husband or brother. They rarely unveiled outside the door. In recent years, they have however been given more freedom in education and professional life.