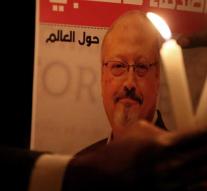 ankara - A senior public prosecutor from Saudi Arabia comes to Turkey on Sunday to speak with the leader of the investigation into the murder of journalist Jamal Khashoggi. That is what the Turkish president Recep Tayyip Erdogan said.

He demands that the Saudis clarify who ordered to kill Khashoggi and where his body is hidden. Erdogan also said that Turkey has much more evidence, which is made public 'when the time is right. 'The president wants Saudi Arabia to hand over the eighteen suspects identified by Turkish researchers. 'The killer is among them,' said Erdogan.