Home / World / Saudi princess becomes ambassador in the US 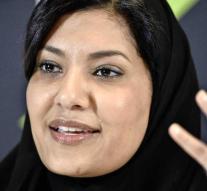 riyad - Saudi Arabia sends a female ambassador to the US for the first time. According to a statement from the royal house in Riyadh, Princess Rima Bint Bandar bin Sultan bin Abdulasis...

The princess, who was educated in the US, has previously been proclaimed by Forbes Middle East as one of the 200 most powerful women in the Arab world.

Her predecessor Khalid bin Salman, the younger brother of the Saudi Crown Prince Mohammed bin Salman, becomes Deputy Minister of Defense in Riyadh. After the murder of journalist Jamal Khashoggi at the Saudi consulate in Istanbul, the two brothers were internationally criticized.