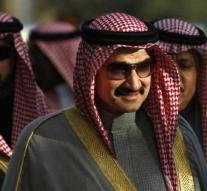 - 'It is high time that Saudi women start driving and it is high time that we close the book on this issue.' It is not the first words of a petition by a human rights organization, but an open letter to the Saudi Prince Alwaleed bin-Talal bin Abdulaziz al-Saud has spread through Twitter. For him, should have women in the conservative Islamic kingdom quickly the freedom to drive a car.

Although the law does not explicitly forbids women to drive a car, it is still impossible for them to legally take place behind the wheel. They simply can not get a driver's license.

Alwaleed calls it a violation of their rights. He points out that society also in other respects has changed radically, without abandoning its Islamic traditions. Thus, more and more Saudi women work, compared to previously taboo.

According to statistics cited by the prince now have about 1.5 million women in paid work. They need 'safe means of transport to go every morning to work. '