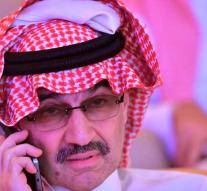 riyad - The Saudi prince Talal bin Abdulaziz is deceased. That's what his family announced on Saturday. The prince has turned 87 and has been ill for a long time.

Talal bin Abdulaziz, brother of King Salman, was also called the 'red prince' and was known for his liberal views. He was, among other things, Minister of Communications and of Finance and Economics. He lived in exile in the sixties for some time after he had openly criticized the regime in Saudi Arabia.