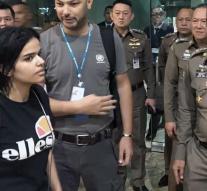 bangkok - The 18-year-old Saudi woman in Bangkok, who is fleeing her family, has again begged for asylum in Canada, the US, Australia or Britain.

Rahaf Mohammed Mutlaq al-Qunun says he is scared to death, now that her father and brother have arrived in Bangkok. According to the Thai immigration manager, however, the father can only meet his daughter if he receives permission from the UN refugee organization UNHCR who has taken care of the young woman.