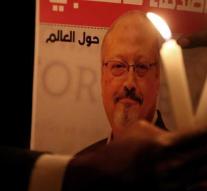 riyad - A Saudi prosecutor has demanded the death penalty for five of the eleven suspects of the murder of Jamal Khashoggi. The critical Saudi journalist was killed on the 2nd of October in the...

The requirement was formulated during the first day of the lawsuit against the eleven. That was not yet the substantive treatment. Saudi Arabia is still waiting for evidence from Turkey and the interrogations of some suspects are still ongoing.

The Khashoggi case has seriously damaged the international reputation of Saudi Arabia. The crown prince Mohammed bin Salman, the actual ruler in the country, is held responsible by many for the bloody murder.