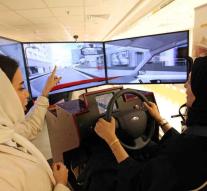 riyad - It was a bizarre spectacle, earlier this month in a luxury hotel in Saudi Jedda. During a fashion show no models walked on the catwalk, but drones were used to fly the expensive dresses through the hall.

The height of prudishness and, according to critics, yet another proof that the country still has a long way to go before women enjoy equal rights. They may drive for the first time from Sunday, but in almost all other areas the men are still firmly behind the wheel. The society lags far behind the reforms implemented by crown prince Mohammed bin Salman. Age-old social and religious traditions are difficult to eliminate in a short period of time. Even some of the women think that the changes are going too fast. The authorities must take into account the feelings in the country. For example, the head of the new Entertainment Authority was dismissed earlier this week by the king, because female acrobats from a Russian circus in the country had played in too tight packages.

Yet there is a small revolution. The prohibition of driving was for decades the symbol of the oppression of women. A conservative cleric who thinks that women are still not allowed to sit behind the wheel because of their 'little brains', now ends up in a straight line in prison. But the same applies to activists who have worked for women's rights for a long time. Reforms are good, as long as they are imposed from above. Others are not allowed to take credit, because that could only give the population the idea that they can enforce change.

There is a sense of both optimism and uncertainty among the women in the country. From Sunday there is literally a world open to them: due to the heat, long distances and limited public transport, a car ride is often the only way to get somewhere. But that it is now allowed by the government does not mean that it is also tolerated by the family or the imam. That is why many women are still reluctant to get a driving license. They are afraid of the reactions from the environment and fear to be harassed by men in the street. Their driving lessons are also five times as expensive as those for men.

The crown prince understands that his country must modernize, especially if it can count less on oil revenues in the coming years. According to some estimates, driving for women, who can suddenly go to work independently, will generate up to $ 90 billion in additional sales in the coming years. Now jobs for the women, because the number of professions that a woman can fulfill is still limited. Moreover, she may not even open a bank account herself.