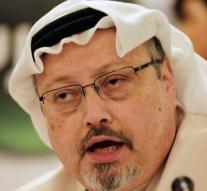 istanbul - A prominent critic of the government in Saudi Arabia has disappeared in Turkey. He is probably being held at the consulate of Saudi Arabia in Istanbul.

According to Turkish colleagues, Khashoggi disappeared when he visited the consulate to arrange papers. According to his wife, he has not come out and is being held by the consulate. This has been confirmed by two government officials.

Khashoggi works for the American newspaper Washington Post, among others. He was 'very concerned' about his disappearance.