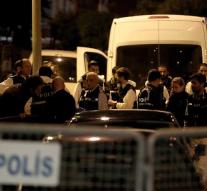 istanbul - Journalist Jamal Khashoggi died when he was questioned at the Saudi consulate in Istanbul. That statement Saudi Arabia will give for the death of Khashoggi, CNN reports on the basis of anonymous sources.

The interrogation would have gone wrong. According to the statements made by CNN, interrogators would have acted in Saudi Arabia without permission from the authorities.

Turkish and Saudi researchers entered the consulate on Monday. That is the last place where journalist Khashoggi is seen alive. He entered the building in early October and did not come out anymore. Pool height would also be taken in the nearby official residence of the consul.

Saudi Arabia is under great international pressure to clarify the disappearance of the critical journalist. In the US, among other things, there is a lot of criticism. President Trump phoned, among other things, with King Salman, who gave him a 'complete denial' of guilt. 'It sounded like he had no doubt,' Trump said.

Earlier, the Washington Post wrote that American intelligence services knew of a secret Saudi plan to kidnap Khashoggi. Discussions about that would have been taken care of.

Read more about the case that has sharpened international relations: