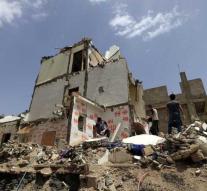 cairo - The coalition led by Saudi Arabia has carried out a bombing of air force targets at the international airport of the Yemeni capital, Sanaa. The rocket attack was mainly focused on a launch site of drones and ballistic missiles, said a coalition spokesperson on al-Ekhbaria TV.

The area in Yemen is managed by Houthi rebels. Al-Masirah TV, a channel controlled by the Houthis, says that at least 30 attacks have been carried out so far on targets in the area around the airport.