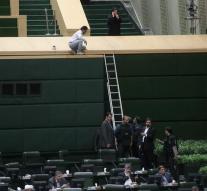 teheran - Special units of the Revolutionary Guard in Iran have accused Saudi Arabia of being accused of the deadly attacks in Tehran on Wednesday. 'The terrorist attacks were committed only one week after US President Donald Trump's visit to Saudi Arabia. Saudi Arabia supports terrorists. That Islamic State has claimed the attacks confirms our suspicion that the country is involved in these ruthless attacks, 'the statement said.

The Revolutionary Guard also said to take revenge on IS and its allies. 'Let there be no doubt that we want retribution for the attacks in Tehran. We will take revenge on terrorists and their followers. '

At the two attacks on the Iranian Parliament building and the mausoleum of Ayatollah Khomeini, at least twelve people died. In addition, more than 40 injured were reported. Four terrorists insisted dressed as a woman entering the parliament building and on the southern edge of the city an equal number of the ayatollah mausoleum sheltered.

A terrorist blew himself at the Iranian Parliament, the three others were shot dead. Parliamentarians have not been injured because the terrorists entered a part of the complex where no representatives were present. At the mausoleum, a perpetrator also managed to let go of his explosive. Another was shot dead. Two terrorists survived the attack and were arrested.

The sunni extremists of IS claimed responsibility for the attacks. Iran, where more than 90 percent of the eighty million inhabitants are shiite, has been more likely to face terror of solar extremists. Iran supports Iraq and Syria militias fighting against Sunni rebels- including IS.