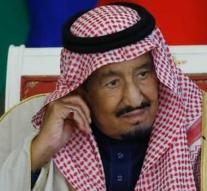 riyad - The Saudi king Salman bin Abdulaziz al-Saud has replaced the army command. Ministers involved in the security policy have also been exchanged. The news channel al-Jazeera reported Tuesday that the changing of the guard has to do with the growing criticism of the bloody military intervention in neighboring Yemen.

Since March 2015, an international coalition headed by Saudi Arabia bombarded rebels from the north of Yemen who in 2014 broke a large part of the country, including the capital Sanaa. The disastrous attacks on the population did not significantly reduce the rebels.

The new Saudi chief of staff is General Fayad bin Hamed al Ruwayli. King Salman has also appointed a woman, Tamadur bint Youssef al-Ramah, as Deputy Minister of Labor. It is rare in the conservative kingdom that a woman holds such a prominent government post.