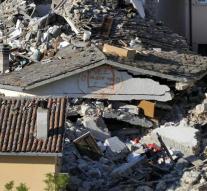 - Victims of the earthquake in Italy receive a state funeral Saturday in Ascoli Piceno. These are also the Italian President Sergio Mattarella and Prime Minister Matteo Renzi present. Bury the dead come from neighboring Arquata.

All the victims of the disaster be remembered. Also on Saturday declared a national day of mourning. The flags on public buildings go half-mast.

Friday buried the first victims in Rome and Pomezia. In Amatrice, where 218 victims attended Tuesday's memorial service. Also, there will premier Renzi to be.


When the earthquake came definitely 278 people were killed, but that number could still rise because the debris has not yet been cleared. The rescue operation is difficult because of the many aftershocks, but rescuers keep hoping that they find survivors.