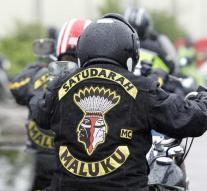 breda - Satudarah president Angelo M. Monday nothing at the court in Breda said about the offenses of which he is accused. Like the other main suspect Björn E. he invoked his right to remain silent.

The motorcycle club boss suspected of involvement in a criminal organization, drug production, money laundering and weapons possession. The case came to light in 2010 when a police informant Björn E. pointing. Which would make quality ecstasy and amphetamine and under the protection of the motorcycle, the informant said.

The Prosecution said Monday know that 292 000 will of M. he would have that amount laundered, including the cash settlement of two Harley Davidson motorcycles.

In total nineteen suspects in this case. The others appear in the next two weeks to justice. Among them several Satudarah members. Most were arrested on November 30, 2011, inter alia, Breda, Tilburg and Eindhoven. The fleeing M. was picked by a helicopter from the A2 at Vianen. When the suspects were also except drug money, weapons and a rocket launcher found.

The police an impressive arsenal of detection methods used. Underneath an undercover operation, supervision, monitoring cars with standard beacons, wiretapping and monitoring of data from banks and car hire.

The penalty claim in the study, called Akutam, sound at the end of the month. The court his rulings end of the year or early 2017.