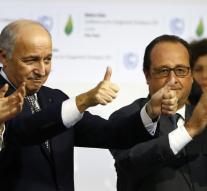 - At various places in the world has reacted with joy at reaching climate treaty in Paris. US President Barack Obama called it " huge " : "Almost every country in the world has signed the Paris agreement on climate change, thanks to the leadership of America," Obama has announced via Twitter. He comes later Saturday with a statement.

IMF top woman Christine Lagarde called the agreement a " critical step forward ". It believes that there is a hefty price tag should hang on emitting greenhouse gases. Only then do companies to alternative energy initiatives, said Lagarde.