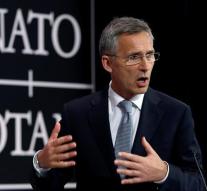 brussels - The regular consultation between NATO and Russia on Wednesday in Brussels that Secretary General Jens Stoltenberg concerns only led to happy faces. The agenda except the hot potato Ukraine especially reducing the risk of disagreement and saber rattling.

The so-called NATO-Russia Council as a regular dialogue between East and West has been around since 2002. According to the Danish NATO chief, the concert proved its worth again because Moscow just as NATO is waiting for tensions. The Russians have proposed to include the area around the Baltic Sea, where Estonia, Latvia and Lithuania feel threatened by Moscow, agreeing a situation of 'air safety'.

Both parties want to continue peacefully resolve the tense situation around Ukraine, as NATO reported afterwards. Russian interference there is the West still not tasty. Afghanistan also came up. NATO wants allied forces there also remain at the current level after 2016 and certainly finance the Afghan security forces until 2020.