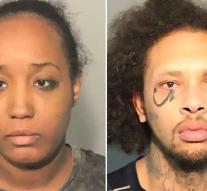 new york - America has been shaken again by a 'House of Horror'. Again it is California where a large family, this time ten children, was terrorized and tortured for years. The father would have shot at his children with an air rifle and a bow with dart arrows and applied waterboard techniques to them.

At the beginning of this year, the police in California in the town of Perris liberated thirteen completely neglected and starving children, some of whom were chained to their beds.

The stories about the house in Fairfield are even more horrifying if possible. The father of the ten children, Jonathan Allen, according to his mother-in-law would worship the devil and tortured his own children, aged 4 months to 11 years old. His wife would have been informed and helped.

He has now been arrested, just like his wife. They deny all allegations. On the photos from the criminal file, serious injuries can be seen on the bodies of the children.

The police found the family after reports that one of the children was missing. During a house search, they encountered appalling conditions, feces, waste and food lay all over the ground. The 12-year-old missing daughter was eventually found somewhere in the neighborhood, sleeping under a tree.