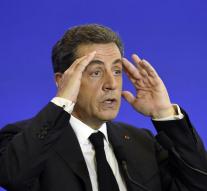 - Former President of France Nicolas Sarkozy is angry because an investigative judge who has requested his phone records. Thus Sarkozy's name popped up suddenly in a controversial investigation into drug trafficking between the Dominican Republic and Saint Tropez.

The reason for the retrieval of the data was that Sarkozy client was of airline SN- ths. A small plane of that society appeared in March 2013 to accommodate about 700 kilos of cocaine. The shipment of drugs was discovered by the authorities of the Dominican Republic. The pilots were arrested, but managed to miraculously turn back to France.

The judge requested include the so-called geodata of Sarkozy's phone, which can be checked where someone was at a certain time. While the former president is not suspected of being involved, he feels insulted.,null, What are they thinking? I was in Punta Cana with 700 kilos of cocaine ? '' Sarkozy scolds in an interview with Le Parisien.

He suspects that both the Minister of Justice and President Francois Hollande was aware of the grotesque,null, '' investigation and finds that his civil rights will be violated.,null, I have no more rights than others, but certainly no less. ''

Nicolas Sarkozy is the leader of the Conservative Party Republicans, until May of this year called UMP. Between 2007 and