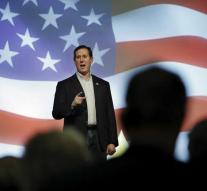 - Republican Rick Santorum considers the race to stop the presidency. This CNN reported Wednesday. The 57-year-old conservative and Roman Catholic Santorum would support another candidate in the race and this Wednesday to disclose according to CNN.

In the election campaign of 2012, Santorum was unexpectedly strong support from the Republican ranks, but it will not float this year. At the first Republican election last Monday in Iowa Santorum finished near the bottom. He got less than 1800 votes only 1 percent of Republican voters behind him. In 2012 he won the election yet.

The Republican Party had chosen at the party congress from 18 to July 21 in Cleveland who's presidential candidate and candidate to be vice president. The presidential elections are 8th of November.