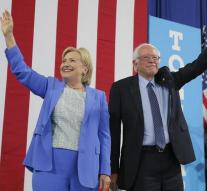 portsmouth - Bernie Sanders has drawn Tuesday behind Hillary Clinton. He promised her during the party convention later this month to support the Democratic presidential candidate.

Secretary Clinton,, '' won the nomination procedure of the Democrats, Sanders said during an election campaign in Portsmouth in New Hampshire.,, And I plan everything to do in my power to ensure that it becomes the next president of the United States. ''