Home / World / Sanders person of the year for readers Time 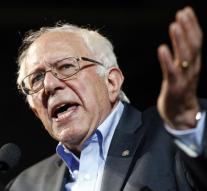 - Bernie Sanders was chosen by readers of the US magazine Time as person of the year. The politician with Hillary Clinton in the race to become presidential candidate for the Democrats. He trumped-known world leaders and other influential personalities off.

Sanders got at the election, which closed on Sunday, just over 10 percent of the vote. The Pakistani Malala Yousafzai finished second with 5.2 percent for the Pope Francis (3.7), which was chosen in 2013 by the magazine to all person of the year.

The Time selects on Wednesday itself the Person of the Year.