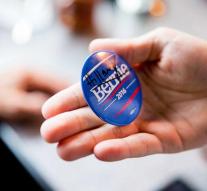 - Bernie Sanders joins next Tuesday in New Hampshire formally behind the presidential nomination of Hillary Clinton from the Democratic Party. That the New York Times reported Thursday on the authority of three Democrats involved in the preparations.

The Clinton campaign leaders and Sanders have held daily meetings to bring the rivals closer together and get the policy priorities of Sanders on the agenda. In return for his support Sanders would get a prominent speaking at the Democratic convention later this month.

Clinton Sanders clearly defeated in the Democratic primaries. However, the senator from Vermont restrained his overt support for her to pry concessions to his leftist political agenda and reforms in the nomination process of the Democratic Party. Sanders thereby threatened to come alone, especially after public figures like President Barack Obama, Vice President Joe Biden and the left wing of the party popular Senator Elizabeth Warren will be rallied behind Clinton.