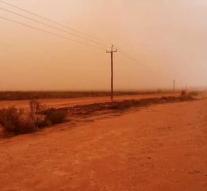 sydney - A large sandstorm in the southeast of Australia obscured the sun and caused a nuisance. The sandstorm is the result of the drought that has persisted for months. Because of the strong wind, sand, dust and dirt are spread over a large area.

In the city of Sydney, visibility was only a few meters. The sky was orange in the interior. According to the Australian weather service, the storm area has a diameter of 500 kilometers.

The authorities advise children, the elderly and people with lung and heart problems to stay indoors.

Sand storms are more common in Australia, but according to experts a storm of this magnitude is uncommon.