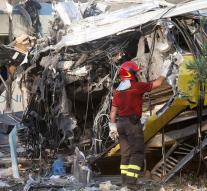 - The 6-year-old Samuele is the first victim of the Italian rescuers Tuesday from one of the train wrecks pulled after the head-on collision in southern Italy.

Perfectly was the boy after the devastating crash still conscious. The child was trapped in the wreckage and shouted for help. 'He could tell us himself his name and age. He was in a panic and to calm him, we let him sign movies on his phone to see, 'said one of the rescuers to the Italian news agency ANSA.

Who Samuele was in the train, is unclear. 'He called to his grandparents, but if they were really in the train, we do not know. 'The boy was taken to hospital by helicopter. Presumably he has not suffered any serious injuries.


The death toll from the head-on collision currently stands at 27. There were another fifty people injured. The trains collided on a single track between the towns of Andria and Corato. It is not clear how the two vehicles have ended up on the same track.