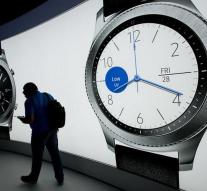 - Samsung on Wednesday presented the smartwatch gear S3. That happened at the fair IFA in Berlin. The Gear S3 looks like a luxury old-fashioned watch with numbers and hands, but everything is digital. '' It looks and feels like a real watch. When you see it you would not say it's a smartwatch. It is sophisticated and timeless, '' says Samsung.

Wearers can choose their dial, and that can be modified at any time. There are thousands of designs according to Samsung. The smartwatch includes a GPS function. Also, it is possible to listen to music on the watch. It is even possible to pay with it without contact with Samsung Pay.

The Super AMOLED display of the watch has 16 million colors. It is an 'Always On Display, 'he's not in black but lets see constant over time, just like an old-fashioned watch.