Home / Tech / Samsung is working on a foldable cell phone 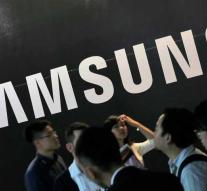 It has been rumored for some time that Samsung was working on a smartphone that harks back to the openable mobile phones that were popular at the beginning of this century. According to Koh, research has shown that there is a market for a new folding model.

Samsung has had a hard time on the market for smartphones in recent years. The South Koreans not only experience fierce competition from Apple, but also from cheaper brands such as Xiaomi and Huawei. Technically they hardly do more for Samsung.

Koh acknowledged to CNBC that a novelty on Samsung's smartphone branch was badly needed. '' Every innovation must be relevant to our customers. They must immediately realize: this is why Samsung has made it. ''