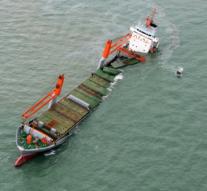 zeebrugge - The salvage of the sunken Dutch freighter Flinterstar progressing well for the Belgian coast. The front part of the ship has been removed from the sea.

The ship was broken recently in pieces.,, The recovery goes smoothly, important for shipping, '' let Secretary Philippe De Backer (North Sea), out Tuesday. The ship's remains are processed and reused.

The Flinterstar sank on October 6 for the coast of Zeebrugge after a collision with a gas tanker. No one was injured, but it leaked more than 300 tons of oil into the sea. The Dutch shipowner Flinter runs for the salvage costs, given the court earlier.


The ship must be completely removed for the winter, but perhaps succeed earlier.