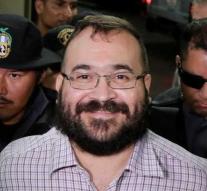 amsterdam - A Mexican governor who had two billion euros disappeared from the treasury of the province of Veracruz receives punishment. A fine of, converted, 2,645 euros and nine years in prison.

The Public Prosecutor's Office also seizes 42 houses and lots that Javier Duarte, a party member of the almost departing president Enrique Peña Nieto, collected with revenged taxpayers' money. Duarte fled to Guatemala but was arrested and delivered in July 2017.

In Mexico voters react fiercely to the, in their view, summary sentence. Duarte became the biggest symbol for political corruption from the president's term of Peña Nieto. 'Even my penalty for driving with a drink was higher,' Diego Campoy complains on Twitter.

Under Duarte, Veracruz seemed to have been extradited for years to organized crime. Police and Justice watched while drug cartel Los Zetas was not laid across the street in smuggling, extortion and murder. The verdict that Duarte had been paid by organized crime dropped the judge.

As a result of impunity, Veracruz changed into a club. At the beginning of this month a mass grave with at least 168 skulls was found. It is not the only thing. Hundreds of relatives of missing persons reported for identification.

In 2016, the federal audit office (ASF) in Mexico City announced that since 2011 already 60 billion pesos (2.7 billion euros) of public money had disappeared under Duarte. While the ex-governor has to growl, his partner Karime Macías enjoys a luxury life in the expensive district of Belgrave in London.