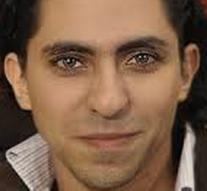 strasbourg - The Saudi blogger, writer and activist Raif Badawi won the Sakharov Human Rights Prize in 2015. That was announced Thursday by the EU parliament in Strasbourg. The prize for freedom of thought is linked to 50,000 euros.

The 31-year-old Badawi is the founder of the site Free Saudi Liberals when discussions are held about politics and religion. He was arrested in 2012 for insulting Islam and subsequently sentenced to a long imprisonment and whipping. He was last year the first fifty lashes before the eyes of hundreds of spectators. Badawi is still in prison in Saudi Arabia.

The other two remaining candidates were murdered Russian opposition leader and activist Boris Nemtsov and democratic opposition in Venezuela.

Nemtsov fought for freedom and democracy in Russia and was assassinated in February 2015. The Mesa de la Unidad Democrática (Roundtable of Democratic unity), uniting the democratic opposition to the totalitarianism,null, '' of the current Venezuelan president Nicolás Maduro.