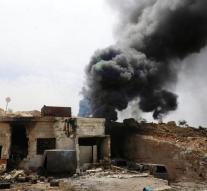 moscow - The Russian Ministry of Defense said to the media on Friday that at midnight the safe areas in Syria were a fact. The largest area is the Idlib province, with the neighboring Latakia, Aleppo and Hama districts. There are more than a million people living in total. According to state secretary Alexander Fomin, the air force has not been flying since 1 May.

The US delegate at the Astana Peace Summit, an initiative of Russia, Iran and Turkey, agreed to create conditions for political settlement in Syria. The fact that the United States, the United Nations and Saudi Arabia supported the escalation agreement, according to Fomin, ensures compliance. He also said that Russian fighters would continue to carry out attacks on targets of Islamic State terrorist organization.

The Pentagon spokesman Jeff Davis said in Washington that the military operations of the US-led coalition in Syria did not change through the appointment. In those areas where the arms are silent, IS IS not active. 'Our mission is focused on IS, far further east,' said Davis. He did not comment on the safe areas.

Rebellion groups rejected the deal and said Iran would never recognize as a supervisor on any plan for ceasefire. Mohammed Rasheed, spokesman for the militia Jaish al-Nasr, said that Russia is 'playing only political games' and 'issuing statements. 'He does not believe that Syrian and Russian fighters stop bombing in the areas of insurgents pursuing the departure of the Assad government.

'It's not the first time,' said Rasheed, referring to earlier violations of a file. 'As long as fighter planes throw bombs on civilians there is no sign of a truce. Only when they stop, we can work on a political solution. '