Home / World / Sacrificial animals can not be sacrificed 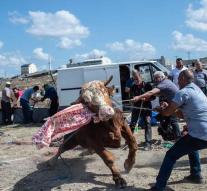 bursa - Thousands of stubborn Turks have been injured during the Festival of Sacrifice in recent days. They wanted to slaughter an animal per se, but they could have used a butcher better. Because professionals know, unlike amateurs, how to deal with panicking animals.

For example, a man from the vicinity of Antalya saw how an angry bull trampled his two sons under the hooves. 'We wanted to eat him, but he was about to eat us,' the father told a local newspaper. The boys had to go to the doctor for a check-up.

And in the town of Bursa, a goat jumped from the bottom of a three-high pan, on top of the head of a 50-year-old man. He is now in the hospital with two tears in his skull. The goat could not escape his fate and ended up on the spit.

The amateur butchers also injured themselves regularly. A man from central Anatolia used his knife so rudely that he cut open his own lower leg. He could laugh at it after all, he tells the Turkish newspaper Hurriyet: 'I always liked people who injured themselves during slaughter. And now I am one of them. '