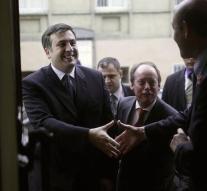 - Mikheil Saakashvili, former president of Georgia, on Friday a new political party established in Ukraine. With the party he wants the Ukrainian parliament as soon as possible. This week, Saakashvili stepped down even as governor of Odessa.

The former president of Georgia, from 2004 to 2013, wants ' as soon as possible and in a peaceful way 'early parliamentary elections. At a press conference Saakashvili said that his party will be different than the established order. ' Our goal is the so-called changing political elite. We bring people in politics who want to work for their country, not their party, oligarch or wallet. 'He went on to strongly criticize President Petro Poroshenko and his inability to reform. ' Reforms and well-being are somehow in contradiction with each other, '' he said of the president.

Porosjenko Saakashvili appointed in May 2015 as governor of the Black Sea region. When Saakashvili stepped down earlier this week, he accused Porosjenko its support criminal groups in Odessa.